Your puppy won’t be a puppy forever. As a pet parent, we know you want your pup to grow into a beautiful and happy dog. But for this to happen, you need to understand the different puppy development stages and what to anticipate for each stage.

In this article, we’ll walk you through the different stages every puppy goes through, what to expect, and what to do about it.

" Puppies are born unable to see and hear, and have very limited ability to move. They are greatly dependent on their mother on everything. "

After the mother dog gives birth to her litter, the development stage begins. Puppies are born unable to see and hear, and have very limited ability to move. They are greatly dependent on their mother on everything. They depend on mom to feed them, care for them, clean them, and keep them warm.

During the neonatal stage, the pups’ social skills and coordination are greatly influenced by mom (or stepmom, as some mother dogs reject their young or die in the process) and their littermates. From birth up to two weeks, the pups will just eat, move a little bit, sleep, cry whenever they’re hungry (usually every two hours), and repeat.

Additionally, the mother dog is not the only one capable of taking care of the litter – read more here for tips on how you can take care of newborn pups.

When pups turn two weeks old, their senses will begin to heighten up and they will have more interactions with their fellow littermates and with mom. During this stage, their baby teeth will start showing and their eyes & ears will begin to open. They will also start to crawl, try to stand, move around, wag their tails, and may even try to bark! By four weeks old, the pups will be able to pee and poop without the help of mom.

This transitional stage is also where weaning starts. Weaning is the transition of the puppy's diet from its mother's milk to a solid growth diet. Puppies can be fed soft, solid, and vet-recommended puppy food at three weeks old (with your supervision) and be completely weaned by the time they are eight weeks old.

Socialization and Vaccination: Three to 16 weeks

At three to 16 weeks, the pups will engage in active play with each other and with mom. You will notice a lot of inhibited play biting while they are playing– don’t worry, this is completely normal.

During this stage, if mom is nervous or aggressive of people around her, this might affect the litter and the pups may feel the same. This is why socialization is important. You can start by having your pups interact with different people. You can also expose them to different activities and experiences like riding cars, allowing them to play freely on your lawn, meeting new people together with their fur-babies, and exposing them to different sounds, like a honking car, a ringing doorbell, or a ringing phone. Fun and happy experiences & memories during this stage are very essential and will play a great role in how the pups will interact as they grow up.

This is also the stage where vaccinations begin. According to the American Kennel Club, puppies should receive vaccinations starting from six to eight weeks. By the time the pups can be weaned from the mother, they should have already been vaccinated for distemper, parvovirus, and parainfluenza.

Note: The recommended age for separating puppies from their litter is eight weeks old, so puppies aren't supposed to leave mom before that.

At four to six months, puppies will undergo a lot of developmental milestones and changes.

Adolescent pups are like teenagers. They love exploring and they are in a constant search on where they belong. They love to socialize and they love the company. During the adolescent stage, pups already understand that they are a part of the pack and that pack consists of you, your family members, and your other pets at home.

Also during this stage, pups who are not yet spayed or neutered will sexually mature and can get pregnant or cause pregnancy. For your female pup, let her wear dog diapers as she will come into heat and may soil your house. These dog diapers may not prevent male dogs from lurking around but will act as a protective covering that will help prevent any untimely breeding and pregnancy.

Provide diapers like that of Pet Parents®. These diapers are made with soft non-abrasive WickQuick® proprietary fabric that absorbs fast. This feature greatly helps prevent diaper rash and urine burns and allows your pup to feel comfortable all the time.

" Pet Parents® diapers are made with soft non-abrasive WickQuick® proprietary fabric that absorbs fast. This feature greatly helps prevent diaper rash and urine burns and allows your pup to feel comfortable all the time. " 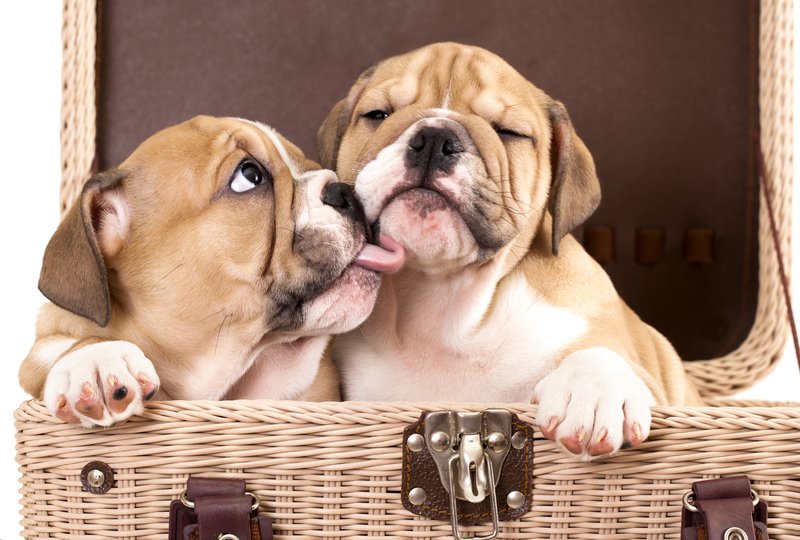 As Cesars Way stated, puppyhood isn’t something that lasts just a few weeks. Dogs don’t become adults until sometime between they are one to two years old. Puppy development stages come with challenges and setbacks. But these challenges make both you and your dog better.

As they say, there is no handbook on being a good pet parent, so watching your dog go through experiences and transform from a cute little pup into a beautiful grown-up dog makes pet parenthood even more exciting.

Micka Virtudazo is a full-time content creator at Pet Parents who lives with thirteen adorable American Bullies and a Shih Tzu-Maltese mix named Gretel. She especially enjoys writing how-to articles as she feels through this she can connect to other pet parents on a more personal level.